based in the u.s.a

FULFILLING THE ASPIRATIONS OF

FOR THE GOOD OF THE MANY

compassion in the world

Founded in the U.S.A. in 2013 by His Holiness Drikung Kyabgön Chetsang, the 37th head of Drikung Kagyü Lineage.

In 2013, causes and conditions came together in the United States for the creation of a non-profit organization to serve as a source of support for His Holiness Drikung Kyabgön Chetsang's activities in the world and thus the Drikung Kagyu Foundation USA (DKF-USA) was established.

The Drikung Chetsang lineage of reincarnate-lamas is known as one of the main human embodiments of Avalokiteśvara (the buddha of compassion) in the Tibetan Buddhist world. Since escaping from occupied Tibet in 1975, His Holiness has selflessly dedicated his life to the flourishing of the Buddha's teachings in general and the continuity of the Drikung Kagyü Lineage in particular. Aside from his work in the spiritual, cultural and educational realms, His Holiness has also initiated green and sustainability projects in the Himalayan region to improve the lives of the peoples - Buddhist, Muslim, Hindu and animists - living in the highest desert-terrains in the world. DKF-USA is one of several charitable foundations worldwide aiding in His Holiness' extensive network of projects both in the spiritual and secular realms.

DKF-USA exists for the purpose of fulfilling the aspirations of His Holiness Drikung Kyabgön Chetsang.

DKF-USA is dedicated to promoting spiritual, educational, cultural and environmental programs and projects initiated or supported by His Holiness. The Foundation is primarily focussed on - though not limited to - such programs in the Americas. We are also invested in the growth and firm establishment of the Drikung Kagyü Lineage in this region.

His Holiness returns to the US

His Holiness Drikung Kyabgön Chetsang returns to the United States in April and May of 2016. His Holiness’ schedule will 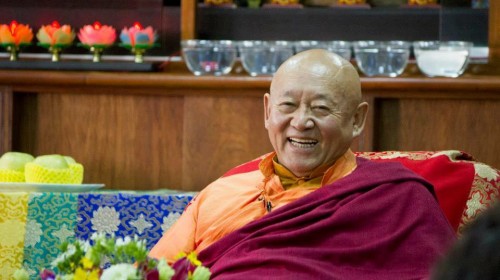 2015 Tour of the Americas Schedule

A Photographic Documentation of Drikung Institutions in the Drikung Valley

This past summer, a party of four that included two DKF-USA Board members traveled to Central Tibet to document the

our next event in

Amitabha Millions Mantras for World Peace with His Holiness

Drop us a line and let us know what we can help you with.

Drop us a message

Feel free to contact with us through mail address.